The domestic violence cycle of abuse is a very nice description of what happens in situations of psychological abuse and helps to explain some of the dynamics in such relationships.

Some groups talk about a 3 step cycle and others have up to 6. I prefer a 4 step cycle because it more aligns with the experience of the people I work with.

Let's get straight into it... 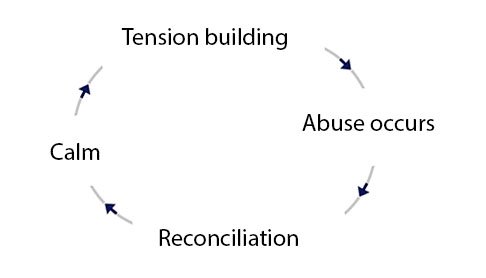 In this phase, the abuser begins to get agitated. The victim knows that something is up. In order to try and avoid a blow up, the victim does all sorts of things to try and appease the manipulator. Of course, it's never enough.

The abuser is irritable, intolerant of all sorts of things, even things that were acceptable the previous day. This unpredictability, as well as the knowledge that things are going to go bad is one of the reasons that the victims say that they feel like they are walking on eggshells around the manipulator.

Note, too, that this phase comes after the calm phase. This means that the victims often say that they are often 'waiting for the other shoe to drop.' Or that they start to get uneasy even when things are going well because they know that the situation is going to deteriorate in one way or the other. (This is something that people have to relearn in their recovery from psychological abuse, that things can go well for them and it does not mean that there are bad times ahead. There can be good times and more good times and only rarely something going wrong!)

This can be mental, emotional, physical or sexual. Some people think they would rather have had some kind of physical abuse so that there were at least evidence of abuse, because bruises are easier for others to see than the evidence of emotional abuse. The thing is that when there is physical or sexual abuse, there is typically psychological abuse first. This control means that the victim cannot easily leave the situation and ends up being subjected to various forms of abuse over considerable periods of time, years or even decades.

Here we see the manipulator in action. He or she will use all sorts of tactics to justify the bad behavior.

All these things are designed to force the victim to accept the abuse. After some time the manipulator knows exactly what to say and do to get the victim to settle down and continue in the relationship. The victim is basically made to forgive the abuser. Or at least forgive them enough to give them another chance.

On rare occasions, the abuser knows that the victim is seriously doubting them and they will provide gifts. This does several things. Firstly, it makes the victim feel better, so it's easier to forgive. It's hard to be angry at someone who has just done something nice for you. Secondly, it makes the victim think the the abuser does actually care. And thirdly, the alternation of abuse and nice gestures, increases the dependency of the victim on the abuser. Fourthly, you can be sure that these presents will be used later in the form of, "I bought these great things for you and look how you are treating me now!" The manipulators typically attach terms and conditions to the good things they do for you.

Things are peaceful. Everything seems to be going ok. The victim is reminded of the nice times at the start of the relationship. There is renewed hope that things will continue this way. Forgiving and forgetting is much easier now. The victim looks forward to a better future.

During this phase they are actively manipulating your impressions of them, leading you to think that they are normal people, after all.

In some ways, this is actually the most dangerous phase for the victim! The forgiving and forgetting means that the victim ends up tolerating even more abuse in the future.

Anyone can do nice things for others. The most vile person can do something wonderful for another person.

Not everyone can abuse people.

If your partner is doing horrible things to you, making you feel miserable on a regular basis, humiliating you frequently and making you feel unloved, unworthy and a failure, well then, that's what you need to pay attention to.

They are treating you very badly. So not only are they capable of this, but they will continue to do it in the future. It does not matter what nice things they do for you, you have to give a lot of importance to the abusive aspect. Why? Because nice people don't coerce and exploit other people.

So that leads to the question about what kinds of people do abuse others?

If you haven't been looking into the nature of abusers, then it's definitely worth a look at those with personality disorders, also known as psychopaths, sociopaths and narcissists. If you are dealing with a psychopath or a narcissist, then you really need to know about it.

A cycle can last 5 minutes or 6 months. An argument over breaking a glass can be a few minutes long while abuse over making a decision about buying a house can go on for months.

There may be different cycles happening at the same time.

The abuse cycle typically continues even after a separation, especially if there is a divorce going on or you have to sort out a shared property or business. The manipulators will continue to manipulate and abuse you as long as you have contact with them.

I see that I am in the domestic violence cycle of abuse, now what?

Get professional help. It will save you time, heartache, suffering and money.

Return from Domestic Violence Cycle Of Abuse to